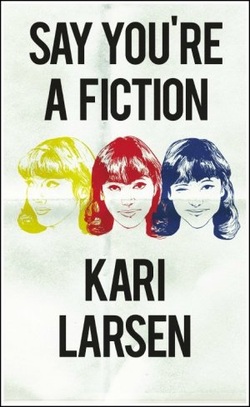 Poetry is the universe that surrounds the tiny, rocky province of prose; it’s where we learn that our linguistic laws are relative and artificial. This frustrates people – it intimidates and annoys them – and it has given the publishing industry license to ignore poetry (especially the chap-book) more so than literary fiction or even the short story. The impression, perhaps justified, is that people have no time for poetry, ironically, because it so concise. Novels – even big, Franzian leviathans – teach us how to read them, and even the experimental ones count on the reader’s familiarity with the quotidian world – light and shadow, gravity and magnetism – in order to highlight their departures. The physics engine of prose is easily understood; being alive qualifies you to read it. Does anyone even know how to read poetry?

When I was in graduate school, I often asked professors this question. The answers were highly gendered (though, one hopes, not wholly representative). A male professor told me that reading poetry was about mastery – overpowering the ambiguity and fluidity of poetry by bringing the rigidity of theory to bear on it, binding it with context, biography and history. To read a poem was to break it, to domesticate it, to choke the life out of it. A female professor suggested something nearly oppositional – acknowledging the bewildering power of poetry, surrendering to it. To read a poem was to drown in it.

Take, then, Kari Larsen’s excellent chapbook, Say You’re a Fiction. If I say it’s beautiful written – darkly and wisely crafted – surely that is diversion, though no less true. I have to say more, but what, or – rather – how? We aren’t dealing with characters or plot, exactly, and so summary seems foolish, yet I’ve got to say something about the piece. We have some measure of constancy: over and over, two men chase the woman who narrates her flight:

“Two men / chase me / through the Louvre / in my nightmare”

But repetition is not understanding. Not yet. So, something has to be done – one needs a strategy, or at least a tactic. Which will it be, then, murder or suicide?

First, there’s Murder: Poems are not parallel universes, like ghosts or neutrinos they do touch our world at certain points, however delicately – that’s where we’ll set the hooks. The epigraph is often the poet’s throat, bared and thrust at us. Larsen’s Godard taunts us: “When you see your own photo, do you say you’re a fiction?” This is the artist’s double-game, the representational uncertainty principle: when we think Godard is making a film, he’s giving us life; when we think he’s documenting, he reminds us – with the frame, the jump-cut, the montage – that he’s not. An irony: in this old slippery spot we set a hook.

It’s just a tether, but the restriction from the infinite to the finite is drastic, a celestial contraction. Now we can start to wrench other references away from the morass of ambiguity – Godard gives us Anna Karina and Jean Seberg, Breathless and To Live One’s Life – and at each point, we set a hook. Larsen’s “Anna” and “Jean” are each the muse, the object of desire, the subject of the gaze – real and unreal in equal measure. And into these films – and into their tangled webs of identification and reference – Larsen inserts her voice. In her first poem, we’re inside the chase; immediately following, we’re outside, watching the chase as a film and recognizing ourselves onscreen. We’re brought to the scene of a shoot (or a shooting) – and then another, and another – and each time the emotion is further bracketed by the cool distance of film; even the soundtrack, the classic emotional ploy, is alienated:

Likewise, human actions are straight-jacketed by the script-as-existential-law:

This is one way to read Larsen – to be one more predator, chasing her down the corridors of the Louvre with a camera and a gun, to say with cold detachment that you’ve won. But Larsen’s poems aren’t disarmed or domesticated (as even the stateliest sonnet has a little feral blood in its veins). You cannot kill what’s wild about them (although I’m sure you can exorcise it from your own reading and keep your own house clear).

But if it’s communion you want – be it with demons or spirits – then murder won’t suffice.

In Larsen’s hands (so to speak), Godard’s mise-en-scènes become a labyrinth by Borges, signs trembling between a strangle symbolism and a frightening emptiness. It reminds me of Douglas Gordon’s “24 Hour Psycho” as it manifests in Don DeLillo’s Point Omega – a film requisitioned, manipulated and transposed into words,  so that we can see it, deeper and clearer. But where DeLillo’s language is cold and dead, Larsen’s crackles with dark wit. She knows and loves the game. She has a perfect sense of how to haunt a collection with phrases that return, slightly more twisted each time.

Repetition is not the same as understanding. Sometimes things never connect – some of Larsen’s work will escape you if you try to hunt it down and kill it like prose. Some of her references will elude you. Let them. But, at the same time, don’t take my attitude for Larsen’s. I’m willing – happy, even – to surrender to her dreamscape; Larsen’s heroines aren’t going quiet into that good nightmare. Despite the creeping existential dread, they are ready to fight, both against the ‘two men’ who stalk her and the larger forces which those men stand in for. A métaphore noir: we already know the plot, but sometimes the characters manage to subvert the script. As Larsen writes at the end of “Say You Love Me – oh, Say it with Paving Stones,” perhaps my favorite of the collection: 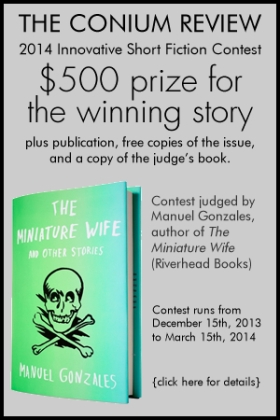